Our latest kit is now available AUT040A will build either of the Mustang GT GrA cars from 1985/86 Dick Johnson, Larry Perkins, Greg Hansford.

The last of our Mustang range is now available this is a limited run of 10 at $75 kit or built to order at $195 no discounts apply.

Midlantic Models have reworked their Ferrari 612Ps there are 4 versions, three raced by Chris Amon 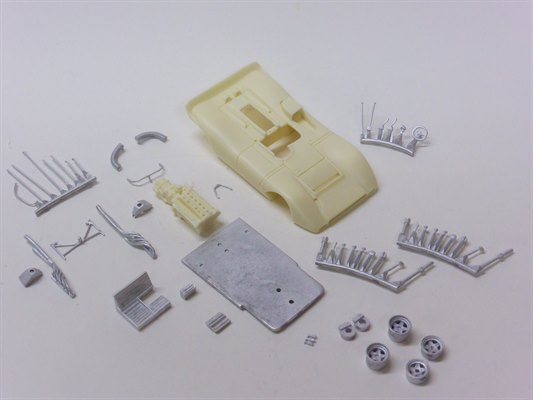 This news letter bring us to the end of our Aussie/Kiwi kits and the end of an era. From now on we move into more international subjects as kit building in Australia and New Zealand has slowed to the point it is no longer viable to make these kits. Our new ranges will be USA/UK based as there is a far larger market overseas, some of these will of course have Aussie/Kiwi connection and we hope to say in touch with our current customers.

Some of the new range will be our own creation and some we have taken over old Marsh Models moulds. We are revamping the old Marsh kits as some are well over 30 years old now. These are multimedia kits with white metal, resin, rubber, turned parts, photo etching etc. Retailing at $100 kit or built to order at $275 the in-house creations will be as our current kits made mainly in resin, rubber, photo etching etc these will retail between $75 & $90 built to order at $195/$275

David Whitehead will continue with his Aussie Porsches and he’s currently working on a new Jim Mckeown car.

Future production in no particular order

I would like to say thank you to all the old customers that have supported us over the last 14 years. Even if you are not buying you can still keep in touch. For those local, I have a lot more time to chat now I’m in semi retirement and coffee/biscuits are always available