The Phillip Island Classic weekend 8 th /9 th /10 th March was a chance to get the team together, because the three of us don’t live close,  not even in the same state, it is difficult to sit down in the same room and discuss the future of AutomodelliStudio. We managed this on the Saturday night over a beer and we have finalised how we will run the business from September 2019.

David Whitehead has been with me for about 14 of the 16 years producing the resin castings and Porsche kits he will continue with this and take on the import of the readymade models. Paul D’Orival has been a customer since 2008 and business partner for the last couple of years, he will continue with the kits and any building that’s required. I will still be involved and will look after the website/news letter and generally stick my nose in here and there.

So much will remain the same, kits will be available, readymade models will be available to order and there will still be a building service. The only real change will be I will be on beach or taverna somewhere in the Mediterranean if Brexit doesn’t ruin our plans.

So as from Sept 1 st Paul will be owner, David will be his best buddy and I don’t know where I will be but somewhere warm with an internet connection and beer.

At last we have the 1984 IMSA Mustang GTPs ready AUT042B will build either of 14 1984 season versions as raced by Bob Wollek, Klaus Ludwig, Bobby Rahal, Tom Glory, Geoff Brabham. The car wasn’t very successful but looked spectacular and the 06 Brabham car has never been models before. Kit $90 built to order $250. 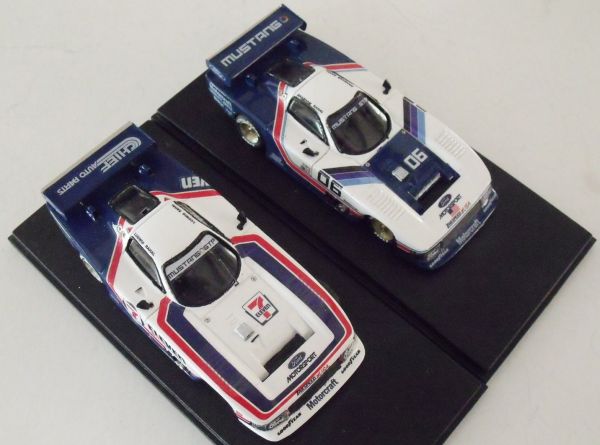 We now have the Mustang GT from the Wellington 500 1986 Dick Johnson entre just one of the ex Bathurst cars for this race. Co driven by Kiwi Neville Crichton they came 2nd in a wet race to the Brock/Moffat Commodore. Kit AUT048C build this version price $85 or built to order at $250

American manufacture of the Indy Car range have announced a new 1/43 Trans Am range starting with the AMC Javelin. There will be three versions from the 1971/72 series Mark Donohue, George Follmer, Roy Woods. If these are as good as their Indy Cars they will be excellent value at around $130.

We are out of decals for Bathurst version of the Mustang GT but Grand Prix Models in the UK have some built models on sale due to a customer passing away before he collected them See them here. If we get enough interest we will reprint a short run of the decals.