You are here: Home / About Us / Dave Eames

Born 1952 in Luton, England, I had a fairly normal child hood for an only child, I had to amuse myself which meant taking things to pieces and, with luck, putting them back together without the parents finding out. I didn’t always manage it.

My Father was in the Automobile industry so it was inevitable that I became involved I suppose. From an early age cars and motor racing were part of my upbringing although I never wanted to be in the industry as my father. I tinkered with all kinds of vehicles from my first bike to motor bikes and finally the cars. I dabbled in rallying with Minis and various other motor sports with MG’s, TVR’s and finally, the love of my life, a Cobra. 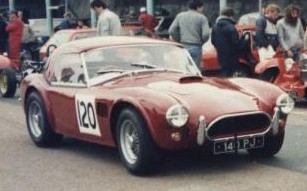 The passion for the Cobra started back in the early 60s when a friend of my Father bought a British Racing Green AC 289 Cobra. The then ultimate sports car. I was around 11 years old but I made a promise to myself I was going to have one, one day. By the time I was old enough they had become a legend, and they were 18,000 pounds. To put it in perspective that was the price of a small house in the UK.

I was never going to afford my dream but with usual Taurean stubbornness I didn’t give up. It was around 1980, just after the TVR had been destroyed by a builders truck and I was looking for a replacement automobile, that I found a company in the UK that was about to bring out a replica of the 289 Cobra, there were lots of 427 replica’s but they were not my passion.

This was a great time in my life, I was building models, I had just met Anne my future wife (and although I didn’t know it at the time, my ticket to Australia) I had a good full time job and now I could have the car that I had wanted for 18 years at a price that I could afford. So in 1981 the project to build my own Cobra began. The kit was purchased from BRA, the donor vehicles were sorted out from an old and decrepit MGB GT and a wrecked Rover 3500. The car uses the MG suspension, brakes, axles etc. along with the Rover V8 engine, all mechanical parts were re-built or re-placed. The engine was tuned to give the same sort of performance as an original at about a fifth of what the real one would have cost. I still have the Cobra here in Australia and one day it will be re-built and be back on the road.

Around the early 70’s, as an apprentice Screen Printer, I discovered the Le Mans 24 hour motor race. This was to be my second passion and one that has cost me just as much as the Cobra.

I have over the years collected Le Mans memorabilia, books, program’s, posters as well as model replicas of the cars – over a thousand of them at one time. I have attended the race on many occasions when living in the UK although it’s a little more difficult now from Australia. I still collect all the paraphernalia that I can, well I still have a lot of models to build.

I have been building kits for over 30 years now, although I did take a break in the 90’s when the demands of a full time job were too much to build model cars. Now the full time job has gone and I can build not only for myself, but as a business here in Australia.

Take a look at the catalogue, for example the historic racing cars, as raced in Australia or New Zealand, the Australian and New Zealand le Mans models, in the Tasman Championship or the Bathurst touring cars. I am currently building customer’s kits as well as supplying kits to customers to build for themselves. I will build any car you would like – not only Le Mans but your road car or your favorite race car.

Contact me to see what is available, you will be surprised just what is out there. There are over 50 manufacturers in Europe and more in Japan and the USA.